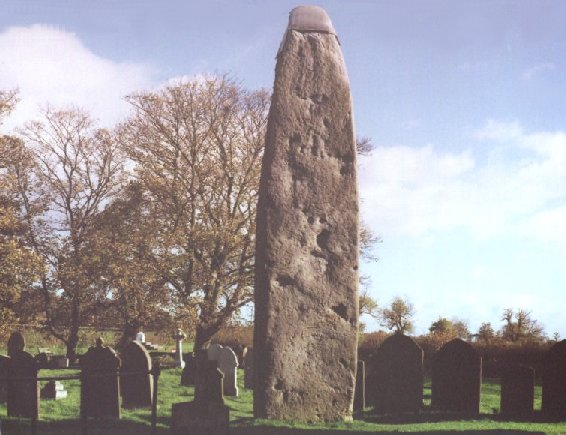 Very little is known about this ancient piece of rock in the churchyard at Rudston village near Bridlington. It is 7.7 metres high, and the nearest rock of this kind occurs at Cayton Bay, 10 miles to the North. There is a small piece of the same rock in the North-East corner of the churchyard. It is supposed to have been situated near the big piece many years ago. Nearby, there are traces of ancient lines that were drawn by removing the grass and exposing the white chalk underneath. There are also burial mounds not far away at Willy Howe, Duggleby Howe and Ba'l Hill. The significance of the standing stone must have been religious. Its date is only roughly estimated as between 2000 and 3000 BC. If you have any further information, I would be interested to hear from you.

In 1872, the local curate, Rev. P. Royston made measurements of the monolith as follows:

Royston says the ground was levelled in 1861, burying a further 5 feet of the monolith. Sir William Strickland had previously dug down and shown there was as much below ground as above before the levelling. This would make the total length about 60 feet. Strickland found great quantities of skulls during his dig and suggested they might have been sacrificial. (Thanks to Barry Scruton for Royston's account, taken from "Old Yorkshire" Vol 1, by William Smith, 1891)

The cursus system, the monolith and several henges and mounds follow the valley of the stream known as the Gypsey Race . This eventually reaches the sea at Bridlington Harbour.

The writer Winifred Holtby (1898 - 1935) was born in Rudston village and is buried in this churchyard. She is best know for her novel "South Riding". 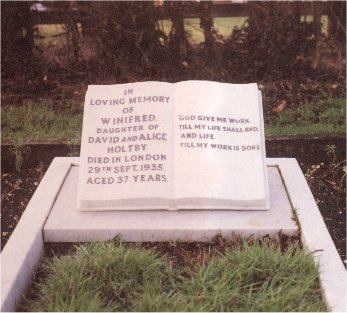