the History of Bridlington

A likely origin of the town's name is suggested in a 19th century letter from the historian Thomas Wright to Edward Tindall, of the High Street, Bridlington. Wright says:

"In the Anglo-Saxon, the sons and descendants of a man or his family, taken in the widest sense of the word, were distinguished by adding 'ing' to the end of his name; thus, a son or descendant of Alfred would be Alfreding, and his family or descendants by blood would be spoken of generally as the Alfredings. In the same way the Bridlings would be the sons or descendants of a man called Bridla. Bridlingtun would be the chief residence of these Bridlings, who were no doubt the family or clan of one of the chiefs whose name was Bridla, who came over in the Saxon invasion, and obtaining this district by his arms, established here the chief settlement of his family."

(A more recent and more likely explanation is that it derives its name from an Angle named Bretel who settled in the Old Town and called it Bretelston.)

In the Domesday Survey the place is called Bretlington. It has also been known at various times as Berlington, Brellington, and Britlington. Many locals called it Burlington well into the 19th century, when Government authorities were insisting that it was Bridlington.

The manor of Bridlington was presented by William the Conqueror firstly to Earl Morcar, and then to Gilbert de Gaunt, who had come over with the Norman invasion force. Gilbert's son, Walter, inherited the estate and it was he who established Bridlington Priory.

During the dissolution of the monasteries, the Crown took the manor and rectory of Bridlington from the Priory. The manor was leased by Elizabeth I in 1566 to 12 local inhabitants for 40 years. However after 25 years, they did not keep up the rent and the lordship passed to John Stanhope, and thence to another group of locals. Again the lease was forfeited, presumably for non-payment of rent, and in 1624 James I gave it to Sir J. Ramsey, Earl of Holderness. When his son inherited it, he sold it in 1663 to William Corbett and 12 other inhabitants, to administer on behalf of all the other freeholders of the manor.

A deed declared these citizens of the manor to be "Lords-Feoffees of the Manor of Bridlington", and were empowered to enrol 12 more to help them administer the affairs of the town. Rules were set up to elect new Feoffees and helpers as vacancies arose, and this system continues up to the present day.

There was a church in Bridlington at the time of the Domesday Survey. Also the survey of monastic buildings undertaken as part of the dissolution mentions a building to the South of the monastery, used for baking and brewing, but thought to have once been a nunnery. This suggests that a convent had been there even before the Norman Conquest. Perhaps most of it had been destroyed by the Danes, leaving only the Saxon church mentioned in the Domesday Book. However, another theory states that this building had been a hospital.

During the reign of Henry I, Walter de Gaunt greatly improved the town, and endowed the church of St. Mary with enough property to support a body of "Canons Regular" of the order of St. Augustine. This order had been introduced into England about the year 1114. The endowment was of his own land and that of certain neighbouring vassals, some mills and some other churches, from as far away as Filey and South Ferriby. Later, the possessions of the Priory became even greater, with land from all over Yorkshire and Lincolnshire.

The Charter of King Stephen gave the Canons "the port and harbour of Bridlington, with all kinds of the wreck of the sea which shall in future happen, or issue, in all places within the dykes called Earl Dyke and Flaynburgh Dyke." In 1200, King John granted them a fair to be held every year on the eve and feast of the Assumption of the Virgin, and a market to be held every Saturday. There is still a fair every year and a market every Saturday.

In the British Museum, there is an imperfect impression of the common seal of the Priory and its counter seal. The former exhibits figures of Christ and the Virgin, and the latter shows the Virgin and Child.

The Priory is supposed to have had very fine buildings. It had a fine view of the sea, but this rendered it vulnerable to attack. So in 1388, Richard II gave permission to build fortifications. Of these only the arched gateway, known as the Bayle Gate remains today. It is an interesting building, and houses a small local museum nowadays.

The names of all the Priors of Bridlington were listed in Burton's Monasticon Eboracense, from Wikeman in 1112, up to William Wode. He was installed in 1531, but took part in Aske's rebellion and was arrested for high treason and executed in 1537. The King claimed the possessions of the monastery, dissolved it in 1538, and then demolished the Priory and its buildings, leaving only the church. As mentioned above, the Crown leased the manor back to local people in 1566.

The most famous Prior was John Twenge, who was made a Saint. (More about him here)

There were some rather strange Priors, such as George Ripley, who dabbled in alchemy (More about him here)

The parish church of St. Mary was left as the only remnant of the original Priory. Still known as Priory Church, its old magnificence declined for many years, but much hard work and dedication has recently paid off, and much of the former glory has been recovered. It is well worth a visit.

Bridlington Quay had its own district church built in 1840, and enlarged in 1851. Known as Christ Church, it is also very fine. There were many Methodist chapels in all parts of Bridlington, but some have now been lost. With many, the shell of the building survives with another use. Central Primitive Chapel was demolished and has become the Iceland store, and St John's Primitive Methodist Church has become the Co-op, but retains the original shape above. One outstanding building remained until recently in the aptly named Chapel Street but became too big to maintain as a chapel and while awaiting another use, it collapsed. Another that is beautifully decorated inside and out is in St. John Street, and this is still in use.

"History of Bridlington Priory" by Marmaduke Prickett, was written in 1836 - I have reformatted this aas an A4 document and and had it reprinted - see books page

The present town of Bridlington was once two separate towns that have now grown together. The original Bridlington was about a mile from the sea, and this part is now referred to as the Old Town. Bridlington Quay was the name of the port area. Trade in corn was once substantial, and the site of the 1826 Corn Exchange building can still be found in the old Market Place. There were windmills and water mills for corn grinding, and in 1837 a steam mill was erected at the Quay. This trade in corn led to malt and beer production in the 19th century, but this declined. Nowadays, there is still some fishing carried out from the harbour at Bridlington, and the surrounding villages still produce corn, some of which is malted locally. During the 20th century, tourism developed into the principal trade of the town, as workers from the industrial towns of Yorkshire began to seek holidays at the seaside. Much of this trade continues now though it has declined in parallel with the decline in industry.

William Hustler founded the town's Grammar School around 1637. It was refounded in its current location by Thomas Harland in 1899. It is now Bridlington School Sports College, one of two large schools in the town, the other being Headlands School and Community Science College.

The harbour was originally a wooden structure, which gradually gave way to stonework. Several acts of parliament have been obtained through the centuries to improve it. New and longer North and South piers were constructed in the 1840's. Only recently, urgent repairs have had to be carried out to prevent wave damage to the North pier. The harbour is nearly dry at low tide, but still offers some shelter in bad weather. It is used by fishing boats, pleasure boats that visit the seabird colonies on nearby cliffs, and by the yacht club. Bridlington Bay itself is a comparatively safe place in high winds, and for centuries ships have sought its shelter.

This is only a very brief look at the history of Bridlington. Any comments on it would be welcome. 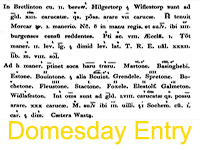 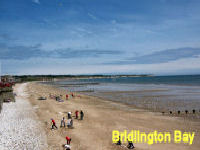 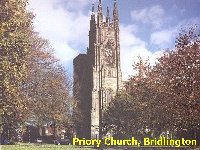 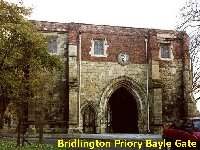 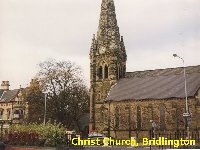 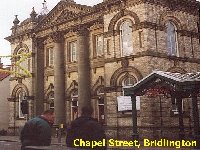 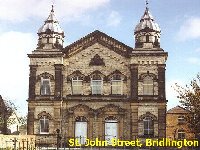 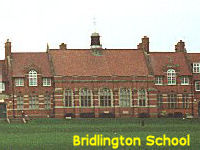 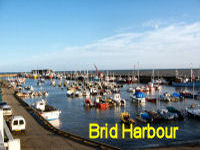